If you didn't already know, Lisa and I are both massive fans of OZYA, and we both adore Ellie Marney and her Every series. It's so good guys, it's hands down my favorite Sherlock inspired book series ever.

Anyway, today I'm delighted to show you the cover for No Limits, which features a character from the Every series and is Upper YA, which means we get more of the quality steamy YA content yesss. 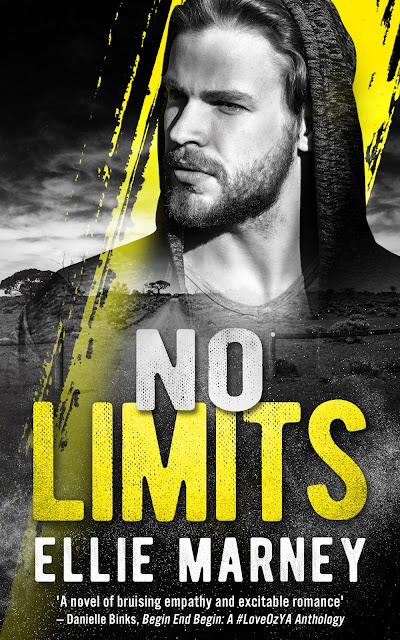 His one attempt to play the hero – helping out his old flame, Rachel Watts – has landed him in hospital. Now injured, broke, and unemployed, he’s stuck back in the country, at his father’s mercy. Harris needs to pay off his dad’s debts, and fast. But working as a runner for a drug cartel is a dangerous path – especially if Harris agrees to narc…

Eighteen-year-old Amita Blunt is the perfect police sergeant’s daughter – practical, trustworthy, and oh-so responsible. Getting involved in Harris’s case was never part of the plan. But working at the hospital, she’s invisible – which makes her the ideal contact for a boy feeding information back to the police…

Harris and Amie’s connection is sizzling hot – but if the cartel finds out about them, things could get downright explosive. Backed into a corner, with everything at stake, it’s time for Harris and Amie to find out if love really has no limits…


I hope you're as excited to read this book as we both are and we are impatiently counting down the days til we can get our hands on this book! In the meantime, you should most definitely check out Every Breath, the first book in the Every series by Marney.


You can follow Ellie on the following ways down below: 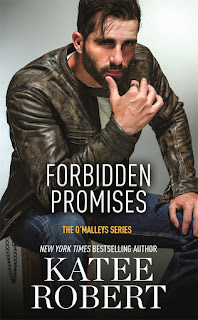 Some lines should never be crossed...not even for love.

Sloan O'Malley just left her entire world behind-her family, her wealth, and even her real name. For the first time in her life, she's free. She can live the "normal" life she's always wanted. A life without fear. But there's nothing safe about her intensely sexy next-door neighbor.

Jude MacNamara has no room for innocence in his life. Only revenge. Still, he's never been able to walk away from the forbidden, and Sloan--who is every inch of pure, mouthwatering temptation--has forbidden written all over her. Only after it's way too late does he discover the real danger: claiming Sloan as his puts a target on her back. To protect her, Jude is willing risk everything...and to hell with the consequences.

Lisa: I started Forbidden Promises right after finishing An Indecent Proposal, which is just an okay read for me, and got hooked almost from the get-go. Sloan was in the background in the first two O'Malley books so I was pleasantly surprised that she decided to take charge of her life and leave the O'Malley family in the third. The more I read about her, the more I love her. She was the quiet one in the family, the kind you didn't expect to do crazy things or rebel. I love how resilient she was, and how she's determined to make her own way. Jude at the beginning of the book was a broody asshole, which is obviously my type. What happened to him was tragic; I understood why he had a one-track mind and that is to avenge his family and eliminate the Sheridans. The tension between Jude and Sloan was off the charts, and I love how their relationship developed from sexual to something else bigger than the two of them had planned. I'm especially weak for the age gap (Jude was 11 years older than Sloan) and how Jude called her sunshine.

"You're my sunshine, and my world is fucking bleak without you."

Also worth mentioning is the buildup between Dimitri (who I surprisingly began to love; I loathed him in the second book but boy he's so annoyingly attractive) and Keira; it was so great I can't believe we're only getting their book next year. Aiden too has redeemed himself in my eyes; I can almost forgive his assholish treatment of Carrigan. Almost.

Can't wait for the next book!

Eri: I actually haven't read most of the other books in this series, but I knew some of the backstory with the mob families and such. Even without being too concerned with that part of the story, I really enjoyed Jude and Sloan as a pairing and both of the characters individually. Katee Robert always writes excellent chemistry and build-up; I was definitely fanning myself a lot during this book. I love that Jude calls her sunshine, for some reason that nickname hits a soft spot in my heart, and Sloan's inner strength was great to see, especially because she seems to be the quiet one in the O'Malley's series. Jude's dark past and the revenge that it fuels was sad to read about, especially as he keeps struggling between that and his growing attachment to Sloan. I love seeing when people are protective of their significant other and seeing mutual affection grow, although I will say because this book deals with mob families and other stuff, the romance can be a little fast-paced at times.

Also, I'm super intrigued by the two pairings we're going to get in the future books, particularly Dimitri and Keira, since they had some intense scenes together on the side.

Thank you to Forever and Netgalley for the review copy.

About the Author
Katee Robert is a New York Times and USA Today bestselling author who learned to tell stories at her grandpa's knee. Her novel The Marriage Contract was a RITA finalist, and RT Book Reviews named it "a compulsively readable book with just the right amount of suspense and tension." When not writing sexy contemporary and romantic suspense, she spends her time playing imaginary games with her children, driving her husband batty with what-if questions, and planning for the inevitable zombie apocalypse.