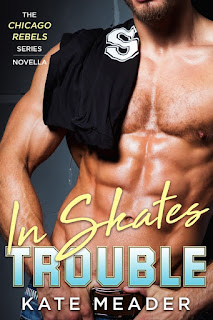 Addison Williams isn't looking for romance, but when she encounters an eavesdropping stranger on an adjoining hotel balcony, she figures she's due a little fun. She just hadn't reckoned on the "fun" escalating so quickly to "out of control." One minute she's flirting with a whiskey-graveled voice in the dark, the next that same voice is telling her to do things. Hot, wicked things.

Cup-winning hockey player Ford "Killer" Callaghan can't believe he let the anonymous woman who blew his mind slip away into the night. He'll track her down because once could never be enough—even if discovering her identity places her strictly out of bounds.

Stolen kisses. Secret hook-ups. Deliciously forbidden in every way. Can a passion that started in the dark find a lifetime of love in the light?

I've been in the world's worst reading slump for some time now, but Kate Meader managed to do me a solid and pull me out of it with IN SKATES TROUBLE.

See, I don't usually give novellas a rating higher than three stars on account of their length, but this one is just too good for a mere three. I was hooked from the moment Addison and Ford had their first encounter equivalent to phone sex (I can always count on Kate to write steamy sexy times!) and finished the book in one sitting.


IN SKATES TROUBLE doesn't feel like a novella to me; it's well developed and didn't end in a rush like some novellas.

Also, did I mention this book has two of my favourite tropes? Addison is Ford's boss's ex-wife, and she is also six years older than Ford. Forbidden romance? Check. Age gap? Check.


Addison is just so admirable; I love her determination to move on from her ugly divorce and make something of herself outside the labels people have given her by starting her own lingerie line. Ford is more than meets the eye; he's all heart and soul, and I love his relationship with his nephews and brother, despite having some problems with the latter. I enjoy their witty banter and the fact that they can't keep their hands off each other every time they're in each other's zone. Their first "meeting" is definitely something else altogether.


What I Don't Love

Um, the fact that we have to wait until August for Harper's story?

Harper Chase is the superwoman in charge of the hockey team Chicago Rebels, and her and Addison's friendship is one of my favourite things about this book. I simply love how supportive they are with each other. I'm also intrigued by the hint of dislike between Harper and Remy; give me all the hate-to-love romances!


Overall, this has been fun! Now let me just go and reread this again as I wait (not so) patiently for August (AUGUST?!).


E-ARC is provided by the wonderful author in exchange for an honest review.